Nissan Commonwealth was once the largest Nissan dealership not only in the Philippines, but in Asia, being  built on a one-hectare property with 14,000 square meter of floor area and a 3-storey service workshop boasting of state-of-the-art tools and equipment.

Our Mission and Vision

Our Mission is to provide an Improved Dealership Experience by complementing the World-class products and facilities with First-class Service that is effective, efficient and reliable with a commitment to continuing improvement and Total Customer Satisfaction.

Our Vision is to be the Nissan Dealer of  Choice in the Philippines, trusted by lifelong Customers to provide World-class products and First-class Service that is effective, efficient and reliable with an unwavering commitment to Customer Delight and Excellence. 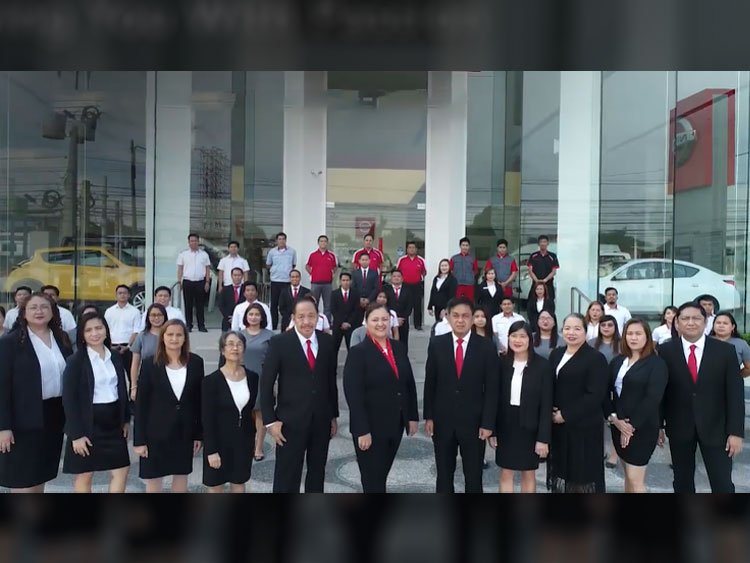 Aiming to be the Nissan Dealer of Choice in the Philippines, Nissan Commonwealth is committed to continuous improvement, yearning to consistently provide effective, efficient and reliable service, resulting in lifelong relationships with its customers whom it commits to Serving  with Passion.

Its founder, Mr. Amando S. San Juan, started his business acumen in the early 1970s by opening a humble gasoline station in Baliuag, Bulacan. He started his venture in the automotive industry by operating an authorized service center for Volkswagen, and eventually being awarded a full dealership status and expanding to Cabanatuan City, Santiago City, Nueva Viscaya and Tuguegarao. Over the years, these dealerships would evolve with the political and economic conditions of the times from Volkswagen to Ford and later to Nissan.

Reaping success from its business operations in Luzon, with the economy having stabilized, Mr. San Juan shifted and focused his business interest in Metro Manila. Thus, Sunny Motor Sales, Inc. was established in 1987 along Quezon Avenue, where dealerships of Fiat, Mazda, Daihatsu, and later Dodge, Chrysler, Jeep, Subaru, Kia and Hyundai would be housed.

The years 1994, 1995 and 1996 were the best years the automotive industry has ever had in its history. This prompted The ESJAY Auto Group to establish what would be their landmark dealership in Metro Manila. Then considered as the largest dealership not only in the Philippines, but in Asia, Nissan Commonwealth, Inc. inaugurated its facilities on August 5, 1996.
Over the years, numerous companies under The Esjay Auto Group have become authorized franchise dealers of various brands. Among the existing dealerships under the Group are the following:

Repeat order of the Supreme Court of the Philippin

Thank you for choosing John Ed Diaz as your Nissan

Make sure that your Brakes are well-maintained to

Living up North and need to have your vehicle serv

Conquer the road like never before with a powerful

This website uses cookies to improve your experience while you navigate through the website. Out of these, the cookies that are categorized as necessary are stored on your browser as they are essential for the working of basic functionalities of the website. We also use third-party cookies that help us analyze and understand how you use this website. These cookies will be stored in your browser only with your consent. You also have the option to opt-out of these cookies. But opting out of some of these cookies may affect your browsing experience.
Necessary Always Enabled
Necessary cookies are absolutely essential for the website to function properly. This category only includes cookies that ensures basic functionalities and security features of the website. These cookies do not store any personal information.
Non-necessary
Any cookies that may not be particularly necessary for the website to function and is used specifically to collect user personal data via analytics, ads, other embedded contents are termed as non-necessary cookies. It is mandatory to procure user consent prior to running these cookies on your website.
SAVE & ACCEPT

By clicking OK, you will now be leaving the Nissan Commonwealth website, and will be redirected to the Nissan Philippines website.